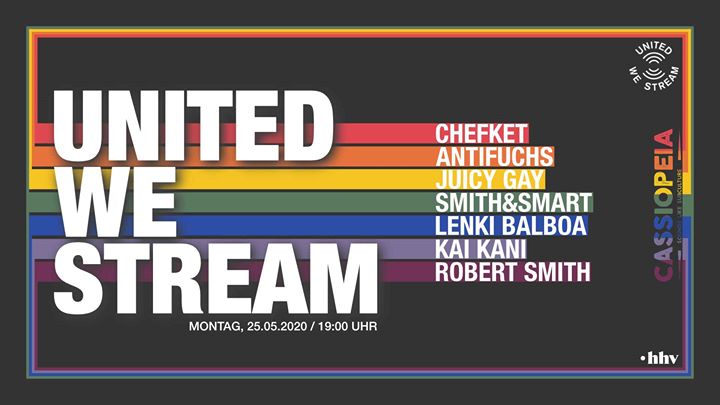 cassiopeia Berlin and United We Stream present an evening of german Hip Hop with the following lineup:

The Berlin Club Culture is facing its biggest challenge in history.
On Friday, the 13th of March, the whole of Berlin’s nightlife was
officially shut down to prevent the spread of COVID-19.
Therefore, about 9000 employees, as well as tens of thousands
of artists are without work + wages and the many venues that
are part of Berlin’s identity face ruin.

As a reaction to closing all Berlin Clubs and the rest of the world
being in quarantine, Berlin declares it’s support and solidarity,
by providing the biggest digital club to you, at home.

United We Stream is streaming from different clubs several
days a week. During these streams, supporters can donate a
variable amount to Berlin clubs via a fundraising platform:

Security measures
This production fulfills highest hygenic standards and we keep
attendace lists from every person involved in the production.
Everybody should keep 2 meters distance from each other and
the staff is reduced to a minimum. All equipment is desinfected,
microphones are personalized.

Any cookies that may not be particularly necessary for the website to function and is used specifically to collect user personal data via analytics, ads, other embedded contents are termed as non-necessary cookies. It is mandatory to procure user consent prior to running these cookies on your website.